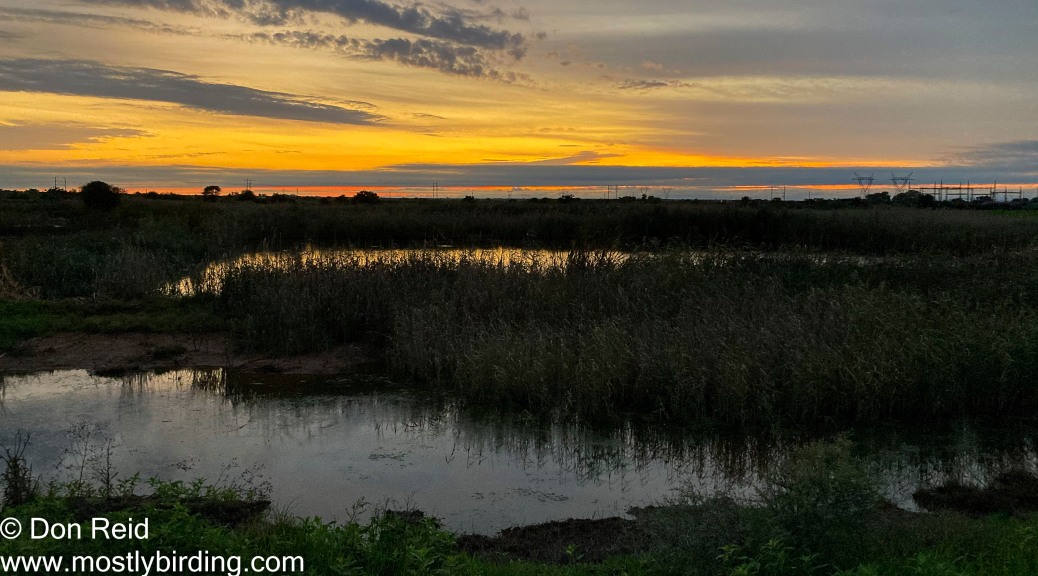 What’s it all about ?

“In the Spring a young man’s fancy lightly turns to thoughts of love” (Alfred Lord Tennyson) – ummmm, well, actually in my case it’s birding and specifically Birding Big Day (BBD), which is held every year on the last Saturday in November – an event not to be missed by keen, occasionally competitive birders such as myself and fellow atlaser Koos Pauw. Oh, and that bit about a young man’s fancy – well that’s stretching the truth to be honest….

The annual event is all about seeing how many bird species can be identified in a 24 hour period from midnight to midnight. Teams are allowed a maximum of 4 participants, of which a majority must agree on each species identification, whether by sight or call.

Birdlasser, the amazing birdlisting and atlasing app developed in South Africa, keeps track of every sighting of every team and can be easily accessed during the day to see where the team stands in comparison with the other 300 plus teams across the country.

And so it was that Koos set up the team, inviting Martin Slabbert and Thinus van Staden, two younger, keen birders to make up the team of four. We met in the week prior to the event to discuss the route and an indicative timeline we would follow – vital to the success of the day’s endeavours, but we knew we should have some flexibility on the day to cater for the unexpected …

A target of 200 species was decided upon by the team – do-able but seemingly optimistic, considering Koos and I had never done more than 185 species in a day over many previous BBD’s. But I was hopeful, even confident that the introduction of two younger members to the team would take us to the 200 mark …. only time would tell. Koos and I refined the route during the last week and we were all set for Saturday 28th November.

Weather forecasts were looking promising and we hoped they would prove to be accurate, however at this time of year on the highveld extreme heat and afternoon thundershowers are the norm so we weren’t assured of a full day’s uninterrupted birding

This turned into quite a lengthy story so to keep it manageable (and hopefully readable) I have split it into 3 stages – The Start, The Middle and The Finish. So here goes with the Start of the day…..

I was up at 2.15 am to prepare for the day and was ready when Koos arrived at 3.20 am, having picked up Martin and Thinus on the way. A short drive through The Glades (the estate where our home is located), stopping at the two small dams to shine our torches on the water, got our list going before heading out.

A short detour through Murrayfield on the way to the highway saw us stopping at a bridge to check for Finfoot (seen recently at that spot) without success, then we were speeding north on the N1 highway to our “dawn chorus” spot.

Red-chested Cuckoo calling monotonously from 2.30 am

Mallard and Yellow-billed Duck out and about on the Glades dam, visible by torchlight

It took 45 minutes to travel the 70 kms to Pienaarsrivier and the irrigation dams that Thinus had suggested as our dawn starting point. Once we arrived at the dams and the surrounding wetlands, it was already light enough to see that this would prove to be an excellent spot to start the day in earnest – the pre-dawn sky was filling with birds on the move and the wetlands were busy with waders and swimmers.

Parked on the main dam’s earthen wall we had a good view of the action all around and birds were added rapidly – so much so that I struggled to keep pace logging them on the BIrdlasser app as they got called out, at the same time scanning the wetlands with binos and scope to verify ID’s and search for new ones.

This action kept us busy for the best part of two hours as we progressed slowly around the main dam and the adjoining wetlands and fields. This was the most productive part of the day and highlights were many –

At 5 am, thousands of Red-billed Queleas rising up out of the adjoining fields and covering the dawn sky. Wave after wave of Queleas followed – a few hundred thousand at a guess – off to feed in the surrounding areas

A tiny sandbank in the middle of one pond held a variety of waders of differing size just too far to be certain of their ID but the scope views confirmed them – Little Stint, Marsh Sandpiper, Common Sandpiper, with an African Black Duck on the side

As the skies lightened, terns appeared – both of the regular fresh water species – Whiskered and White-winged Terns

Three Kingfishers spotted within 4 minutes as we circled the dam – Woodland, Pied and Brown-hooded Kingfishers all presented themselves to be counted

Cries of “bumblebee” from the younger half of the team had me puzzled for a second until I realised they were referring to the Yellow-crowned Bishops buzzing around the long grass, looking a lot like giant bumblebees with their black and yellow colouring and manner of flight

Before leaving the irrigation dams, Thinus suggested a walk through longish grass to a wetland area not accessible by vehicle. What a good idea it turned out to be as we added one very special wader and a handful of other species before heading to the start of our second major focus area – the famous (among birders) Zaagkuildrift Road that starts just outside the village of Pienaarsrivier and meanders west to the Kgomo-Kgomo floodplain

Zaagkuildrift road starts with grasslands on both sides and we quickly picked up Rufous-naped Lark, Northern Black Korhaan and Desert Cisticola, followed by Wing-snapping Cisticola, which performed a display flight in front of us.

Zaagkuildrift road requires slow progress to make the most of the birding on offer, which is plentiful and to be found in the road, at puddles, in the roadside bush and trees, on the fences, in adjoining fields and even in the air.

It was still just 7.36 am when we passed 100 species and our spirits were high. But we had seen many of the common species by now, so the tempo of adding new species was bound to slow down, evidenced by the rate of new species per hour slowing from our initial 35 per hour to 23 in hour 5 and then just 10 in hour 6.

We stuck to the ‘main’ road which despite being a gravel surface is in good condition, our only deviation being the side road which birders know as “Crake Road” – we had progressed about half a km along this road when we came upon a bakkie (utility vehicle) standing in the middle of the narrow road with some agitated looking farm personnel peering underneath. Clearly it was going nowhere for an indeterminate time so we had to abandon any further exploration of the road and reversed out (no room to turn) and continued along the main route.

Plenty of the typical “bushveld” species were present, including 3 species of Waxbill (Blue, Black-faced and Violet-eared) plus a few similarly small birds such as Green-winged Pytilia, Burnt-necked Eremomela, Jameson’s Firefinch and Neddicky

Marico and White-bellied Sunbirds seen within minutes of each other

It was still only 9.30 am with a lot of day left, so we were feeling optimistic about reaching our target. However we knew that the dreaded “middle of the day” lull lay ahead and weren’t going to count our chickens – or birds – before they hatched, as it were.