It is always exciting visiting a place for the first time, especially from a birding point of view, not knowing what to expect and with the chance of a surprise waiting just around the corner.

I wasted no time on arrival and followed local advice to drive to the Kromme River estuary before sunset for a bit of initial exploration. It being low tide, the birds I could see were at quite a distance in the middle of the estuary, so I removed my shoes and socks and waded through the shallow part of the channel to get to the exposed sand banks in the middle of the estuary for a better view.

Many waders were present, including myself at that point, and some of the smaller species such as Sanderling, Common Ringed Plover and Ruddy Turnstone, as well as a selection of larger waders with Whimbrel, Grey Plover and African Black Oystercatcher being most prominent.

The rapidly setting sun was throwing golden reflections across the river channels, making for a magical scene, as the numerous Terns present restlessly took off for a circuit over the wide estuary, settling en masse on narrow strips of exposed sand. Most were Common Terns with a few Swift Terns mingling with them, but standing out with their larger size and bright yellow bills

Next morning we headed into the village to find the knitting shop that Gerda had  heard about – while she spent an hour or so indulging her passion, I carried on with mine and expanded my atlasing coverage to include as much of the town and residential area as possible.

Not too many species were added and I was really shocked by the state of the roads in the town, which were in a sad state of disrepair and obvious neglect – potholes everywhere and no sign of any attempt to fix anything.

We took the road to Cape St Francis, a separate town a short distance south of St Francis Bay (all very confusing when you are not in the know), stopping at Port St Francis (now it’s really confusing) on the way to have a look at the small harbour located there. In Cape St Francis we drove to the sea front and stopped to scan the shoreline and sea – a surprise awaited in the form of an African Penguin close inshore and I was once again struck by the agility it was displaying in the rough seas amongst the rocks, diving under the waves as they came rushing in – it hardly seems like a bird species in those conditions. No African Penguins had been listed before in the pentad so it is clearly not a regular sighting in the area.

On the way out we popped into Sea Point Nature Reserve at the southernmost point of the bay and took a walk along the rocky path beyond the lighthouse, where a few Oystercatchers and Cormorants were visible, while a Cape Gannet flew by offshore and a Bokmakierie proudly claimed his territory in the fynbos.

There were still a couple of hours of daylight left as we returned to our guest house, so we paid a second visit to the estuary where I was thrilled to find a pair of Bar-tailed Godwits on the exposed sand flats – another lifer!

The following day was the last of our Eastern Cape trip and with our flight back to the “big smoke” only being at 6pm we took the “road less travelled” back to PE, via Humansdorp and the surfing hotspot of Jeffreys Bay, stopping frequently along the way. 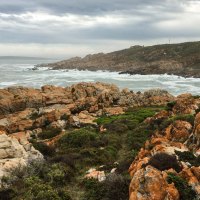