“Christmas in Kruger – it’s going to be very hot!”

Well that was more or less everyone’s reaction when we mentioned our plans for a Christmas break in Kruger National Park. “Yes, we know” was our standard answer, followed by “but the chalets have air-conditioning and so does our car” – this served only to raise a sceptical look or two and we tried hard to convince ourselves that it would all be fine.

As it turned out, we managed to survive the sometimes extreme heat and humidity for which the lowveld is renowned at this time of year – midsummer in South Africa – by spending as much time as possible in air-conditioned areas or shady spots with a cooling breeze and only venturing out during the cooler parts of the day. In fact we elected to stay in camp a lot more than we usually do during visits to Kruger.

Kruger always has a surprise or two and I thought I would highlight some of the surprise encounters, starting with what, for me at least, was the highlight of the week. As so often happens with birding, the encounter was dependent on a series of events which were impossible to foresee – here’s how it happened ………

After spending a night in the Magoebaskloof Hotel, where we rendezvoused with daughter Geraldine and family, we made our way the next morning to the entrance gate at Phalaborwa, passing through Tzaneen on the way and stopping at one of the many farm stalls to stock up on some of the locally grown tropical fruit – bananas, paw-paws, mangoes (not for me, can’t stand the taste) and litchies.

The Road to Mopani

At the Phalaborwa gate we dealt with the formalities and proceeded to Mopani Rest Camp – Kruger had it’s summer clothes on – green and lush as far as we could see. We didn’t dawdle. wanting to get to Mopani and settle in, but a report on SA Rare Birds the previous evening of a Striped Crake near Letaba meant I could not resist doing a detour of about 50 kms which would take me past the spot and I would be able to try for this potential rarity / lifer.

There were 3 or 4 vehicles at the small seasonal pan just south of Letaba and we joined them, asking if any had seen this secretive bird – it turned out that none had, despite spending some time there, but we decided to spend a half an hour or so, scanning the shallow water and vegetation along its edges for any sign of the Striped Crake.

It refused to show and we were about to leave when I spotted a crake-like bird on a log above the water, partially hidden by foliage – success! Or was it? I tried desperately to get some photos to help confirm the ID of the crake, but the results were poor due to the interference of foliage and the shady conditions under the trees.

Later I was able to confirm that it was a Crake by downloading the images onto my laptop and zooming in on the detail, but not the rarity I had hoped for – nevertheless it was an African Crake, also a ‘lifer’ for me so I was more than satisfied.

After 4 nights in Mopani, it was time to move on – to Satara Rest Camp some 140 kms south – not very far by normal standards but in Kruger it translates into a 4 to 5 hour drive, so we planned a stop for lunch at Olifants camp.

We also stopped briefly at Letaba for coffee and a ‘comfort break’ and on the way from there to Olifants, we decided to make a brief stop at the seasonal pan we had visited on the first day, just south of Letaba, despite their being not a single other car there – well, you never know, do you?

We had hardly stopped, still had the engine running, when my heart skipped a beat – a small, unfamiliar crake-like bird was no more than 5m away from me in the shallow water, among the tree roots and tangled vegetation! No, not the Striped Crake but just as good in my book – it was a Dwarf Bittern, a lifer and a bird that I have wanted to find for a long time.

I was ecstatic and spent the next 10 minutes or so watching as it moved slowly and stealthily, foraging in the shallows for its next meal – the sequence of photos says it all.

After two years of not adding a singe lifer to my Southern Africa list, I had found two in the space of four days – what a nice Christmas present! 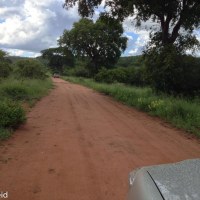