A late lie-in and a slow time getting ourselves ready meant we only started our Bright “discovery” around midday with a drive around the town to orientate ourselves, stopping at the river and the park to take in the scenery

Bright is known as a tourist and holiday destination with a focus during autumn on the multitude of European trees that turn streets into multi-hued avenues and add a bright splash of colour to many gardens and parks.

We enjoyed driving slowly along some of the streets to take in the splendour and to add to the pleasure a few significant birds crossed our path.

The first of these was a Crimson Rosella, scratching in leaf litter at the side of the road, coming up with what looked like acorns or nuts and holding them parrot fashion in its claws while consuming the “meat” of the nut.

Next up was an unexpected sighting of two small birds that were both new to my Australia list – we were leaving a riverside spot where we had parked, when I spotted movement out of the corner of my eye. I braked, reversed and saw several small birds drinking at a puddle some distance from the road – too far to be certain what they were, even with my binoculars, as they were moving about and flitting back and forwards between the puddle and the nearby bushes.

So I did what I usually do in this situation – I grabbed my camera and rattled off a number of shots before the birds dispersed, which gave me a chance to study what I had “captured” and put a name to them.

As it turned out there were two species – both lifers for me :

And if you are a Saffer and think the Silvereye looks familiar, that’s because it is remarkably similar to the White-eyes found in Southern Africa, which carry the same genus name of Zosterops

Our motel didn’t offer breakfast, so we got by on rusks and coffee in the room, but were by now feeling decidedly peckish, so we parked in a side street and walked through the village where we came across an ideal looking restaurant with tables set outside on the pavement and ordered their tasty bacon and egg wraps and cappuccinos.

That gave us an opportunity to decide what to do for the rest of the day and we chose to not try and cover too much of the surrounds, but to limit ourselves to a trip to a neighbouring area that looked interesting.

Before setting off again, we walked along the main street, admiring some of the well-kept older buildings and a church surrounded by handsome trees and popping into a couple of the shops for a quick browse (well, that was the idea, but Gerda’s browsing is a slightly lengthier affair which usually has me wandering about outside looking for birds)

With most of the afternoon at our disposal, we drove around Bright a bit more, then visited the tourist info centre where a very helpful and friendly lady marked various spots on the map for us to explore.

One of them was Wandiligong, an old village where gold was mined in the mid 1800’s, which we thought was worth a visit and was literally just “down the road” from Bright – an easy 6 kms along country roads.

What we found was not a small village as such, but rather a sprinkling of houses and other buildings with a lot of character and heritage spread over an attractive landscape of forests and mountain ranges, set in a picturesque valley

The whole town is now registered with the National Trust as a classified landscape and features historical buildings such as the Manchester Unity public hall (built in 1874), the general store, several churches and a number of quaint cottages. We spent a very pleasant hour or more meandering up and down the roads through the area, stopping to photograph some of the buildings that caught our eye.

The next day dawned sunny and we followed a similar pattern – after a light breakfast self-caterd in our room we heade back along the road to Harrietville, then turned off towards Mount Beauty. The road took us through yet another seriously twisty pass which topped out at 895 metres, which is where we had our own tea and a muffin, while enjoying the view down to the valley below and across to distant mountains topped with snow.

Once we had descended into the valley we entered Mount Beauty – driving around we were a little disappointed as it did not seem to live up to its name and came across as just another town. Driving around the town, it seemed to be ‘closed for lunch’ so we stopped at the info centre which suggested ‘The Bakery’ may be open. We had not seen it so followed their directions and found it tucked away in a side street – their pie and salad was just what we needed and the service friendly so things picked up again

There was not much else to see so we headed back up the pass and down the other side towards Bright. At the T-junction with the main road a roadside stall had been set up – the first time we had come across such a thing in Australia – so we stopped to have a look at the farm produce on offer. The lady running the stall kept up a continuous stream of conversation, some of which we actually understood, and she offered us samples of strange (to us) fruit to taste. In the end we played safe and bought a bag of walnuts from her.

There was still time for another walk along the Canyon trail before the sun disappeared. There were many ducks on the river and the late afternoon shaded light made for some interesting photos.

That brought another most pleasant day in Bright to a close. I will be adding a further instalment on our road trip, covering the trip back to Sale – not nearly as epic as the initial trip to Bright but with a few interesting ‘sightings’, not necessarily birding related … 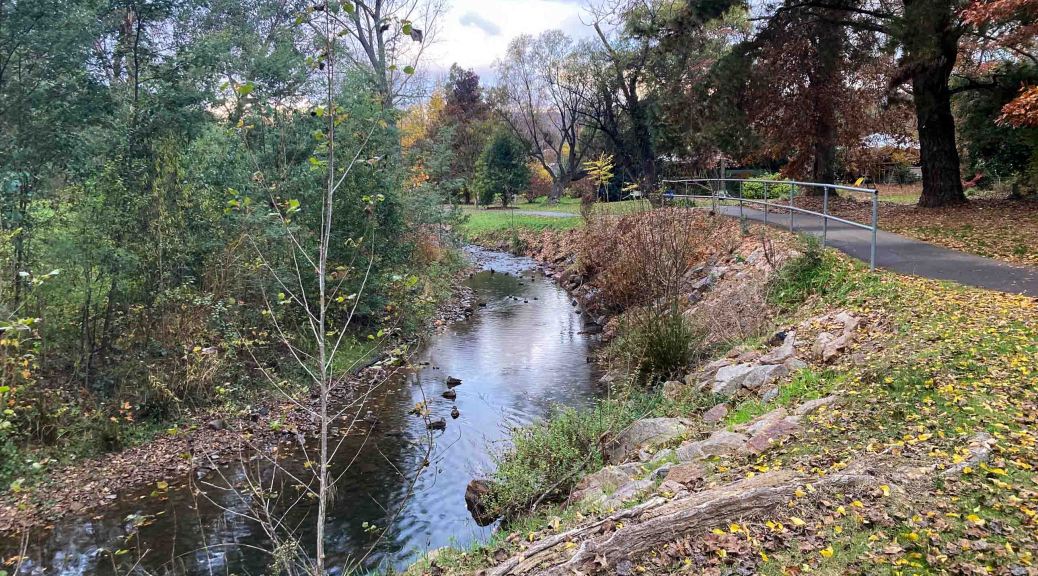 Just to set things straight, this is not the start of a washing powder commercial – how did it go ? “OM(E)O washes your clothes brighter than BRIGHT” or whatever the wording was..

In this second instalment of our road trip along the Great Alpine Road in Victoria, Australia we travel from the small town of Omeo where we spent our first night, to the town of Bright.

We left our rust-ic cottage in Omeo at 11am and ventured into the town for a brunch of toastie and coffee at the only restaurant that seemed to be open. Suitably fortified, we headed onto the main road, which the Aussies saw fit to call the Great Alpine Road, passing the first of many electronic warning signs about possible frosty conditions and ice on the road.

Here I must mention that, before our departure from Sale, we had asked around about the expectations of snow at this time of year along our route and the universal answer had been “no problems, mate” or words to that effect. I’ve learnt to take that expression with a pinch of salt so wasn’t really expecting “no problems”. Nevertheless, the regular warning signs caused a heart flutter or two as we proceeded along the road, but being halfway through May, snow did not seem a possibility…..

The road had again become seriously twisty for long stretches as we climbed into the mountains, with patches of wet road causing me to drive even slower, with those warning signs now firmly embedded in my mind.

On our route was the curiously named Dinner Plain, a small town which turns into a busy ski resort in the winter months. Apparently in the late 1800’s a horse drawn coach service operated in the summer months along the newly opened road between Omeo and Bright. The coach would stop for a midday meal at this spot, which became known as the Dinner Plain.

As we approached Dinner Plain, the first signs of recent snowfall appeared, with a layer on the road verge and lightly covering qthe bare branches of the roadside trees.

Climbing higher still, the snow got more obvious, and we could now see the snow actually falling.

We were starting to get a little panicky by the time we headed into another ski-resort town called Mount Hotham, with heavy snow falling and a thick layer of snow everywhere except for the road itself.

The electronic warning signs along the road were now stating “2WD vehicles to fit snow chains” which of course we didn’t have and even if we did, we wouldn’t have known how to fit them. Unsure about what to do, I stopped at what looked like a tourist information office, put on a waterproof jacket and got out of the car into snow which seemed to be blowing sideways into my face, then trudged through a thick layer of snow to a side door and eventually found a pleasant young lady to tell her our plight, ending with what probably came across as a mildly hysterical “I’ve never driven in snow before!!”

She was a lot calmer than I was and phoned ‘someone who will know’ – soon coming back with the response that ‘no chains are required at the moment’ adding that we should just proceed very slowly, especially around bends as ice could easily be present on the road.

So, we continued on our way, very cautiously and very slowly on the wet roads, with low cloud both sides all but blotting out any view there may have been and reducing visibility to a short stretch of the road itself.

After what seemed like a long time, and with some relief, we realised that the road was now descending, and the snow was diminishing, until it was all clear again and we soon found ourselves approaching the next small town, a beautiful place called Harrietville with trees in autumnal colours and a coffee shop that turned out to be the perfect spot for a soothing cup of tea accompanied by a jam donut.

As we drove out of Harrietville a group of Maned Ducks crossed the road and pottered off into the surrounding grass.

With more than enough excitement and tension for one day, we were thankful that the last 20 kms or so to Bright went smoothly and quickly and we headed to the Bright Colonial Motel, which I’m pleased to say was more in keeping with what we were expecting – a modern place with spacious rooms and a private courtyard all to ourselves.

As is my habit when arriving in a new place, I went for an exploratory walk along the main road then down to the nearby river where I found a pathway called the Canyon Walk and proceeded along it, coming across lovely views and a small suspension bridge which I crossed to explore the other side. A number of ducks on the river added to the beauty of the spot.

What had struck us as we entered Bright, and something we had been told about, was the array of trees along the roads, all in a multitude of shades of autumn colours – our day had suddenly BRIGHTened up no end!

And on that rather corny note, I’ll be telling more about Bright and the surrounding towns in the third and final post on our road trip…. 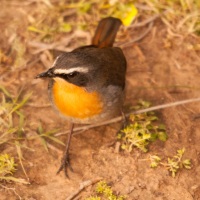