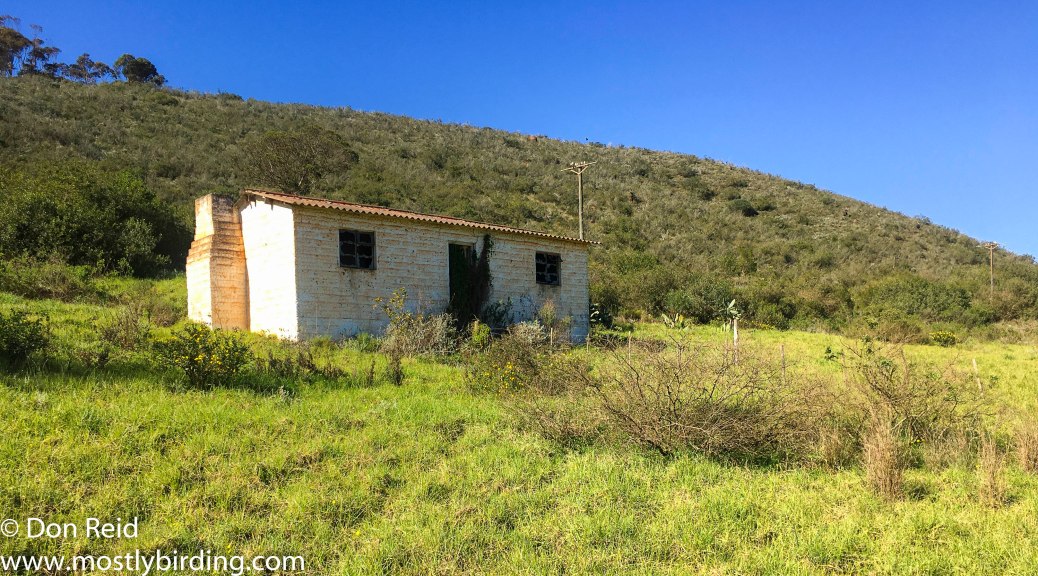 Continuing the monthly look at where Atlasing, or Birdmapping as it is also known, took me in August 2020 …..

I looked for two pentads not too far from Mossel Bay, our home during lockdown, and not yet atlased in 2020 – my survey resulted in me selecting two pentads in the area north-west of Albertinia, an area which I have found to be pleasant and productive from a birding point of view, so they fitted my plans well.

Getting to the starting point of the first pentad meant driving west along the N2 National road to Albertinia, then north towards the mountains and west again along the gravel road that ran through the pentad, ensuring that the sun would be behind me during the prime early morning birding hours.

As I drove along the already busy N2, the view northwards was across low valleys which were filled with mist, giving them the appearance of large fluffy lakes surrounded by hills.

The morning was one of the coldest I’ve experienced in these parts, with the car indicating an outside temperature of just 1 degree C as I approached the starting point – thank goodness I had purchased a woolen beanie the day before, which I now donned to prevent the cold penetrating beyond my ears to my brain – who knows what damage that could do (although some would say the damage was done ages ago).

Fortunately it warmed up as the day progressed and by 11 am I was in shirt sleeves and the beanie was replaced by my battered hat.

The map below shows the location of the pentad, north west of Albertinia. For those who have not visited South Africa, the town marked Agulhas at bottom left is where the southernmost tip of the African continent is located and is a favourite tourist stop.

And this is a closer view of the first pentad, shown by the red square below

Right at the start of this pentad I came across a roadkill victim in the middle of the gravel road and stopped to see what it was (dead birds can be recorded when atlasing) – it was a Crowned Lapwing, largely undamaged so I moved it to the verge just to save it the further indignity of being trampled by other vehicles.

The road was damp with puddles in places from the previous day’s rain and birds were plentiful. Changing quickly into atlasing mode, I followed my usual strategy of driving very slowly and stopping frequently to look around and listen for calls – in the first hour I recorded 26 species while progressing just 2 kms along the road, with so many interesting and promising spots to investigate.

Fresh footprints in the damp mud at roadside had me somewhat puzzled – left by someone running, judging by the depth of the imprints, and someone with very tough feet, going on the very gritty surface.

All the usual suspects were present including Blue Crane and Large-billed Lark, African Pipit and Fork-tailed Drongo, but also some of the scarcer species such as Denham’s Bustard (twice) and Grey-backed Cisticola.

Cape Longclaw on a fence presented a good photo opportunity, as they so often do, but Red-capped Larks in the road were not as cooperative and flew off each time I tried to position the car/ myself/my camera, settling tantalisingly back in the road a way ahead and often on the opposite side to where my camera was pointing. It was probably my imagination but I thought I detected a smirk on their faces each time they left me cursing under my breath. Bird photography can sometimes be a tad frustrating!

A small dam held Grey Heron, Yellow-billed Duck and Little Grebe to add some waterbirds to my list. The last half hour produced two Canaries – Brimstone and Yellow Canary, the third Lark of the day – Agulhas Long-billed Lark, and Cape Grassbird to take the card total to a respectable 48 species.

The second pentad of the morning lies directly west of the first, so I continued along the same road and through habitat similar to the first. Species were mostly a repeat of what I had recorded in the first pentad. Some notable exceptions were Little Rush Warbler which I heard calling from a well reeded stream that I crossed and a Rock Kestrel that passed overhead during one of my many stops.

I spent a coffee break at a copse of bluegum trees next to the road at a farmyard and watched the Fork-tailed Drongo‘s actively flying about and hawking flying insects. A Cardinal Woodpecker called a loud rapid ch-ch-ch-ch-ch and it didn’t take too long to find it high up against the branches of the trees, pecking at cavities and using its barbed tongue to extract larvae of beetles and other insects, spiders and ants.

Passing fields brimming with bright yellow canola, a Yellow Bishop with an equally bright yellow rump and perched on the fence presented an interesting photo opportunity, so I positioned myself and my camera, with some difficulty, so that the background would be the yellow of the canola while hoping the Bishop would stay where it was. It did and I managed to take a few shots, but the distance from the bird meant it was not as sharp as I had hoped… still quite unusual –

Moments later it flew off

A last dam before leaving the pentad held a pair of Water Thick-knee, inconspicuously standing among bushes along the fringe of the dam, while a few Brown-throated Martins raced about over the water.

As I left the pentad I spotted some Red-billed Queleas in a thorn tree, the last record for the day to take the pentad total to 41 and my day’s total to a pleasing 63 after some 5 hours of atlasing this most pleasant part of the southern Cape. 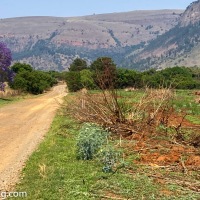 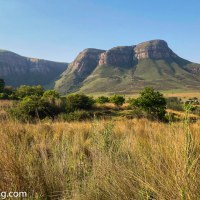