Continuing the monthly look at where Atlasing, or Birdmapping as it is also known, took me in March 2020 …..

The last week and a bit of March saw us on our way from Pretoria to Cape Town and then eastwards to eventual lockdown in Mossel Bay, a trip of some 1850 kms spread over 4 days. As is my habit, I used the stopovers to do some atlasing – always a great way to shake off the effects of a day in the car.

When we stayed over at Lemoenfontein at the end of January on our way back to Gauteng, we hardly imagined we would be visiting this pleasant lodge so soon again and that we would be hearing news that evening that would change our lives along with the rest of the world.

We had plenty of time to do the 400 or so kms to get there from our previous overnight stop at Prior Grange near Springfontein in the Free State, so we took it easy with an extended stop at one of our favourite roadside pitstops – the Three Sisters garage. As has been our custom when stopping here, we purchased burgers at the take-away restaurant (not yet in lockdown, so still operating) and enjoyed them at one of the concrete picnic tables under the trees, surrounded by eager little sparrows, weavers and starlings all waiting for a chance to grab a dropped crumb or two.

We could already see the effect of the C-virus in the relatively few travelers on the road, despite being school holidays (although the schools had closed earlier than planned). The feeling of impending doom was hard to shake off and everyone seemed to be behaving differently.

Not long after, we arrived at the turn-off to Lemoenfontein and as we crossed into the pentad in which the lodge falls, I started driving slowly and scanning the surroundings.

The approach road from the gravel turn-off runs for about 5 kms up to the lodge and provides a good opportunity to find some of the birds particular to the arid Karoo. First up was a Rufous-eared Warbler, a bird which always lifts my spirits, but often difficult to find. I have learnt from previous encounters with this striking little bird that to see it well, one must look out for it flying into a small bush where it tends to disappear from view, only to pop out at the top of the bush and perch there momentarily before moving to the next bush. This one did exactly as expected and we had good views for a half a minute.

Further on we found the first of what was going to be many Lark-like Buntings – a drab bird which often blends in with the arid habitats that it prefers and spends a lot of time on the ground. Strangely, these Buntings were more active and prominent than those I have previously encountered, fluttering about and perching briefly in the open, providing good views of their features – which are hard to describe, except to quote what others have said – “The main feature of the Lark-like Bunting is that it has no standout features” – sometimes birding can be a tad confusing.

We arrived at Lemoenfontein with just these two species logged, checked in and were taken to Room No 9, which I found to my delight was to one side with a small garden in front and a view that stretched beyond over the wide expanse of Karoo scrub.

I took up a seat on the patio and spent time just watching the passing bird traffic, gradually adding to my list with doves and sparrows and the likes of White-backed Mousebird, Dusky Sunbird, Rock Martins cruising by and Greater Striped Swallows resting on the top branches of a small tree.

I wanted to fit in a walk before dinner and headed up the mountain trail, which proved challenging as hordes of mosquitoes descended on all my bare parts – not a good time to be in shorts! I slapped furiously only managing to deter them for a few seconds before they returned with reinforcements.

They weren’t giving me a chance to even lift my binos and look around, but I noticed that they seemed to be getting fewer the higher I climbed, so I hastened to get as high as my lungs would allow then slowed to a more suitable pace to look around properly.

Just then my heavily pumping heart soared as I saw two black shapes high up above the ridge that towers over Lemoenfontein – a pair of Verraux’s Eagles (New record for the pentad) enjoying the late afternoon thermals, gracefully wheeling and soaring. A sight I never tire of.

On the way back to the lodge I added Karoo Scrub-Robin and Pale-winged Starling to close out my afternoon’s atlasing at a modest 18 species – not unexpected in this habitat.

Soon it was time for dinner on the grand Verandah – we had heard President Cyril Ramaphosa was due to speak about the virus pandemic and kept an eye on the news while enjoying an excellent 3 course dinner. By the time it got to pudding we knew that our plans would have to change and we would have to cut short our stay in Cape Town to one day to allow time to get to our house in Mossel Bay before the announced lockdown started on Friday 27th March for at least 3 weeks.

Next morning we left after breakfast – I managed to fit in some further atlasing in between loading the car and other tasks, adding Red-eyed Bulbul, Familiar Chat, Malachite Sunbird and a surprising Red-headed Finch. On the slow drive back to the main road, we saw more Lark-like Buntings, this time openly perched and singing, plus a Karoo Chat and White-necked Raven to complete the atlas card with 27 species logged. I had to remind myself that it’s not about the numbers but all about recording what’s present (and not present) in a particular area at a particular time.

I did not appreciate it at the time but this was to be my last atlasing “away from home” for a long time. 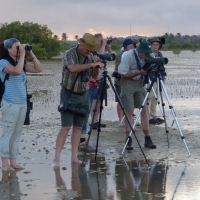 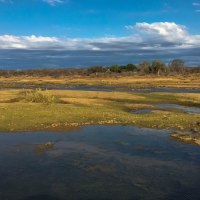