After close to 6 weeks in Sale, Victoria, of which one week was taken up by a very pleasurable road trip exploring the Great Ocean Road, we felt ready to return home, nevertheless sad to say our goodbyes to Stephan and Liesl and Jocelyn and Christopher.

Up at 5am for final packing to catch the 6.55am train from Sale to Southern Cross station in central Melbourne – a relaxing and comfortable train in plush first class seats – this is the way to do it!

At Southern Cross we found our way to the baggage hall which we found had a facilty to store our bags for the day while we discovered some of Melbourne. This was also the moment for bureacracy to go a little mad as the baggage attendant weighed our bags before accepting them for storage (no transport involved, mind you) and finding them, to his apparent horror, to be almost one kg over their 20kg limit, insisted we remove some articles (our books did it) to reduce the weight, which he then placed on top of the bags and took them through a door into the storeroom all of 3 metres away. We did as instructed and left him muttering about the personnel at Sale station who had allowed this gross flouting of the baggage rules.

After that bizarre encounter we found a coffee shop and, suitably calmed and refreshed, we set off to find the Hop-on, Hop-off city bus terminal with the help of Google maps which even showed us which tram to take (thanks Stephan for showing me this useful feature). The tram trip was a mini-adventure in itself despite being just three stops and with some walking we found the terminal at Federation Square.

It’s always good to see a city at pavement level, warts and all, while walking the streets and seeing the citizens going about their normal business – we passed by the gracious St Paul’s Cathedral and the historic Flinders Street Station, both nicely preserved. The trams are an efficient way of getting around the city and as a bonus are free in the central city.

We boarded the Red Bus for the two hour round trip with 14 stops at points of interest, only disembarking at one as we still had to get ourselves out to the airport hotel that afternoon. This gave us a good overview without any real “wow” moments. The inner city as seen from the lower level of a bus looks much like most other modern cities, but once we moved further out there was enough to keep us interested …….

We disembarked at Fitzroy gardens and walked through lovely parkland with autumn leaves falling (do they say “fall leaves falling” in the States?) and covering the vast lawns with a multi-coloured carpet.

In one section was Captain Cook’s cottage, which the blurb said is the oldest building in Australia – but there’s a catch to that – it was originally built in 1755 in Yorkshire, England by the parents of Captain James Cook and was brought to Melbourne in 1934. Apparently each brick was numbered, packed into barrels and then shipped to Australia where it was reconstructed in the gardens.

While trying to get a photo without other tourists posing in front, I was curious about the people in period dress wandering about in the small garden – they turned out to be volunteers who “add to the memorable experience” and provide period clothing for tourists to dress alike and have photos taken, at a cost of course (I must apologise at this point for not enthusing about this potential “memorable experience” which I decided to forego)

We were peckish by this time and headed to the garden cafe where we were told that lunch was “finished”, so we ended up having tea and “party pies” – tiny vegetable pies – plus a slice of banana/walnut bread, which was an odd lunch but rather nice.

Then it was time to catch the red bus again, where it had dropped us off earlier and after a short wait one appeared. It wasn’t long before we were back at Federation Square and we retraced our steps to Southern Cross station, collected our bags (and put the books back in them) and found the Skybus to take us to the airport and our hotel for the night. All that remained was the flight back to South Africa the next day. It had been a busy but worthwhile day and a good way to round off our Australian adventure. We had seen but a glimpse of Melbourne and resolved to see more of it when the opportunity arose. 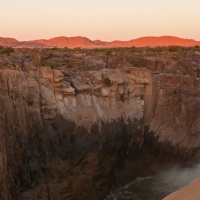 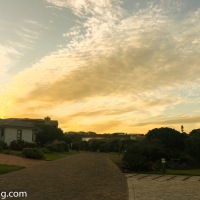