We had made our usual booking for the birding weekend in Kruger Park at the end of January 2014 and were lucky to be allocated the very popular and over-subscribed Punda Maria camp event. This time we added the “Pel’s Pursuit” event, which was to be presented immediately before the birding weekend and promised to be an exciting addition to the itinerary, involving a search for the elusive Pel’s Fishing Owl, which is one of the most sought after birds in Southern Africa and one which I still wanted to add to my “Life List”.

Both events were presented by the West Rand Honorary Rangers who have made these weekends extremely popular over the years.

Joining me on this trip were George Skinner, Nick Royce and Karl Rohrs, while we also connected with Vos and Veronica Vosloo who travelled independently from Kwazulu-Natal.

Birding on the Way

After travelling the familiar route to Polokwane and Makhado, with a breakfast stop at our usual spot, we turned off towards Punda Maria and made a brief detour to Muirhead dams (turn off is at the signboard “Royal Macadamia“), a good site for Pygmy Goose – instead we found a few White-backed Ducks, almost as scarce and always a pleasing sighting.

Next stop was Entabeni forest a short distance from the main road (turn off at Entabeni signboard and follow the “Picnic Spot/Hikers Hut” signs), where we hoped to spot the resident Bat Hawk with the help of bird guide Samson, but this species once again eluded me, possibly being in hiding after the heavy rainstorms that preceded our visit. Nevertheless, Red-backed Mannikin was a special sighting and worth the effort. A walk through the cool forest was a welcome but brief relief from the oppressive heat and humidity we had experienced so far.

An hour or so later we arrived at Punda Maria gate which marked the official start of the extended weekend events. Entering Kruger Park we were soon rewarded with a soaring Tawny Eagle and the familiar summer calls of Rattling Cisticola and White-browed Scrub-Robin. High above a Martial Eagle and White-backed Vultures patrolled the skies in majestic fashion.

Little Bee-Eaters hawking insects from low branches tried to outdo their larger European Bee-Eater cousins, while a Ground Hornbill went solemnly about his business, looking like a well-dressed undertaker as he plodded through the long grass. Soon we reached Punda Maria camp, our base for the weekend, and with a couple of hours remaining before the gates closed, we drove a section of the Mahonie Loop, which produced nice sightings of Wahlberg’s Eagle, Hamerkop, Carmine Bee-Eater and three species of Flycatcher  (Pale -, Southern Black- and Marico).

Next morning started with an introduction to the Pel’s Pursuit team and short talks by Witness on Community outreach programmes, Chris Patton on “Feathers of the North” – the special birds of the Northern Kruger and Tertius Gous on bird photography techniques, all of which were interesting and informative.

The rest of the day was at leisure so we decided to do a game and birding drive to Klopperfontein followed later by an afternoon drive around the Mahonie Loop.

The Park was very lush and green and the grass extra-long following the good rains in these parts – good to see but not conducive to easy game spotting. However our priority remained seeing as many bird species as possible, which is also affected by the lush landscapes as food is readily available at all levels of the food chain in these conditions. Nevertheless there were many highlights of the day’s drives, including :

Friday morning saw us up at crack of dawn for a 5.30 am departure, only to find rain coming down heavily, which delayed our departure until 7 am in overcast weather. Our destination was the Levuvhu River and specifically some of the places along the river known for Pel’s Fishing Owl sightings. The drive was long and bumpy in parts, getting hotter and more humid as the clouds thinned out, until we reached a spot close to the river where our walk would begin.

We set off on the walk, sticking close to the river bank where we could, diverting upwards and over koppies where the river bank petered out, sweating profusely in the oppressive heat and extreme humidity, without any sign of the Pel’s. I was atlasing as we went, relying on our ranger David’s skills at ID-ing calls when they were unfamiliar to me. Some of our group were already struggling in the hot, uncomfortable conditions, so regular stops were made for refreshments and water. All in all, we did close to 4 hours walking, which in these conditions really tested our fitness levels – thank goodness for the beautiful, dense riverine forest in places, which provided some relief from the unrelenting sun.

The birding was good with some memorable sightings :

The river was flowing fast from the rains and was a caramel colour from the stirred-up mud and silt.

The drive back to the camp was a relief for all, as we enjoyed ice-cold drinks to lessen the heat strain from the long walk. Rain started falling which brought further relief, with no complaints about getting a bit wet in the open sided vehicle.

A pity that we did not encounter the Pel’s Fishing Owl after all the effort put in – that’s how it goes with birding – nothing is guaranteed, but fortunately there is always the probability of a next time to try again.

With the Pel’s Pursuit event done and dusted, it was time to meet the rest of the participants for the “Birding Weekend” starting with a relaxed late afternoon drive, during which several species were added to our weekend list, including a European Nightjar, followed by a braai to close out the day.

Next morning, Saturday, was a complete contrast from the hot and humid conditions of Friday – we awoke to rain at 2h30 (early starts are the order of the day with these events) and were ready to leave camp by 3h15 in the relentless rain, which accompanied us all the way to the Pafuri area an hour and a quarter later. The last stretch was particularly heavy and we were all quite damp by this time, only partly protected from the weather by the leaky canvas top and sides of the safari truck.

We parked and waited under the largest tree near the bridge over the Luvuvhu River for another hour in pitch darkness, wondering what had brought us to this place at this hour in these conditions – the simple answer is a passion for birding.

Once dawn broke, we could see how strongly the river was flowing – an impressive and slightly worrying sight, knowing the extent of previous flooding.

We spent some time on the bridge, checking the bird life as best we could and making an impromptu cup of coffee to raise the spirits (ours not others) then made our way slowly to Pafuri Picnic spot, fording the deep pools of water that had formed in the dirt road.

Highlights of the Pafuri area were :

From the picnic spot it was a short but wet drive to Crook’s Corner where the Limpopo was flowing powerfully, evidenced by the large tree stumps being carried along swiftly by the swollen river. We spent time there enjoying several Bee-Eaters (Blue-cheeked-, White-fronted- and Little) as well as the many birds frequenting the adjoining bush – Red-faced Cisticola looking indignant at being disturbed, Common Scimitarbill, Meve’s Starling, Village Indigobird and African Harrier-Hawk overhead.

Our Ranger, Richard, then took us on the long drive to an area east of Babalala, by which time the rain had abated and our spirits were a lot higher. The lunch stop alongside a pan with Little Grebe and Red-billed Teal in residence, was made special by the knowledge that very few have the privilege of visiting this area, which is not open to the public.

On the way there we had some “fun” traversing a stretch which could easily be called “Golden Orb Alley” – a narrow track through the dense bush which is favoured by Golden Orb Spiders to span their webs across at regular intervals. Every few hundred metres the open safari vehicle drove right through one of these massive webs and the resident spider, caught by the canvas roof edge, would descend into the vehicle right in front of the driver and our bird expert in the passenger seat, who happened to have a “thing” about large spiders. This caused some pandemonium a few times in the front of the vehicle, but our Ranger calmly collected them as they were dangling and deposited each one outside the vehicle without even slowing down.

Soon after, we all had a turn at jumping around in our seats as swarms of thousands of “miggies” (midges) hit the open vehicle as we drove at about 40 km/h – one swarm in particular brought us to a standstill as we tumbled out of the vehicle trying to get them out of eyes, nose and ears and to brush them off our clothes, turning it into a chaotic couple of minutes. No wonder this event is billed as “extreme birding”!

However all this discomfort proved to be worthwhile when, travelling along the border with Mozambique, our guides found Rudd’s Apalis and Pink-throated Twinspot in quick succession – both much sought after birds.

From there we headed west back to the main Kruger road to Punda Maria camp through pristine grassland, stopping to enjoy close up views of Elephants along the way, for which, it became evident, Richard had a particular respect. One lone Bull got a bit shirty (correct spelling) and showed some aggression to the metal intruder but Richard had his match, revving the engine and advancing slowly and we were happy to see the elephant back off with ears flapping.

The evening braai was the chance to relax after a long day’s birding – G&T never tasted so good.

Sunday morning we returned to Pretoria with good memories of a superb weekend of birding one of the top spots in Southern Africa.

Stop me if you’ve heard this one

A Glaswegian named Jock, who is not feeling well, goes to see his doctor, one Dr McIntosh, who gives him a good check and prescribes some pills which he dispenses himself and hands to the patient with the instruction to “finish the course and bring me a urine sample in the same bottle”. Jock is a little puzzled by this request because he was complaining of a severe headache, but he follows the instruction and brings the urine sample when he next visits the doctor. The doctor has another look at him and prescribes further pills, with the same instruction to bring a urine sample in the same bottle.

When Jock visits Dr McIntosh a third time he is declared fit and well. Jock is curious and asks the doctor why he asked for urine samples when he didn’t seem to refer to them at all – Dr McIntosh replied in his broad Scottish accent “Well laddie, that way you get your bottles back!” 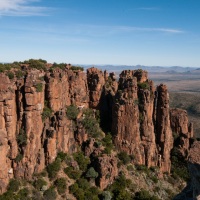